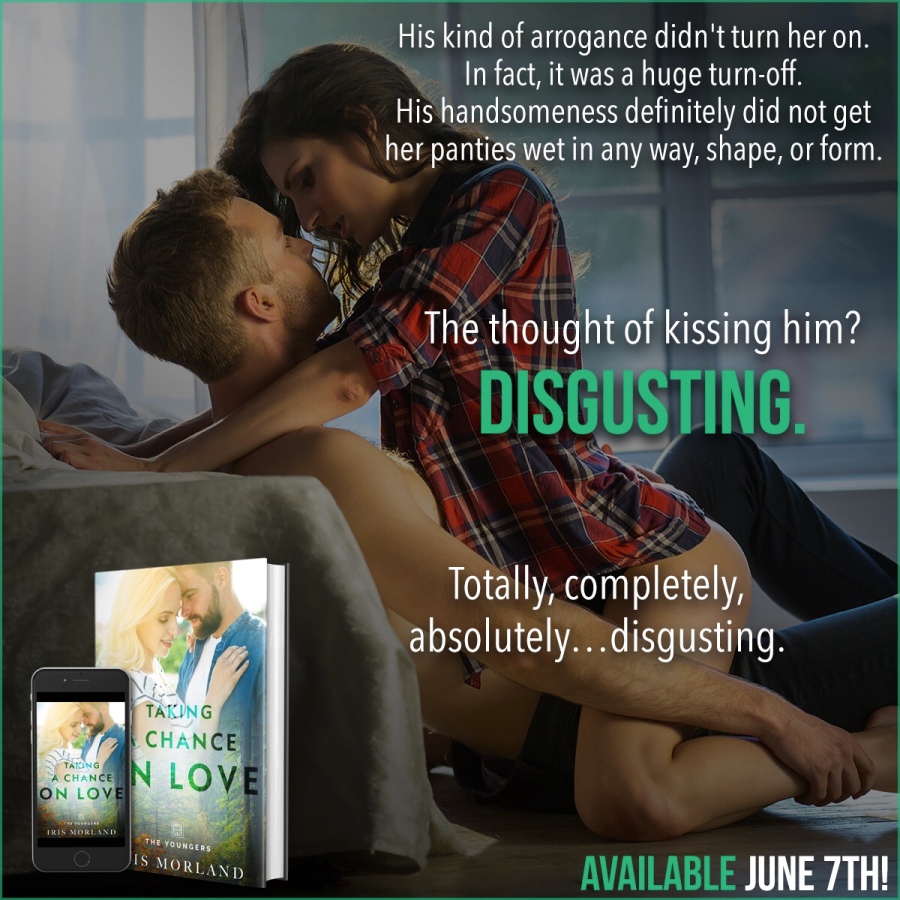 We are a few days away from the release release of TAKING A CHANCE ON LOVE by Iris Morland on June 7th! Check out an excerpt below and be sure to preorder your copy now!

About TAKING A CHANCE ON LOVE

You met them in DREAM A LITTLE DREAM OF ME. Now prepare to fall in love with THE YOUNGERS, a brand-new series from Iris Morland, full of sexy men, passionate women, and the love stories you can’t get enough of.

A free-spirited artist and animal activist, Thea Younger only wants to make the world a better place. She’s a lover, not a fighter—except when it comes to people like the ruthless billionaire Anthony Bertram.

Anthony represents everything that she detests, no matter how handsome or rich he is. When Thea has the opportunity to take part in a social media campaign to hurt his company, she jumps at the chance.

Merciless and driven, Anthony Bertram built his company from the ground-up, dedicating every waking moment to creating one of the most powerful corporations in the world.

Yet he almost lost it all when his marriage fell apart. Embittered from his divorce, Anthony knows from experience that love only makes you weak.

When his company is threatened a second time by a slanderous social media campaign, Anthony vows to discover who is behind the lies and to take that person down.

But then fate intervenes. Thea’s much-needed vacation takes a turn when she finds herself trapped in a cabin with none other than Anthony himself.

Thea wants to hate Anthony, but as she gets to know the man behind the mask, she realizes he isn’t a monster at all. He’s all man—and one whose kisses she can’t resist. Desire flames between them until both surrender to exquisite temptation.

But as secrets loom over them, Thea and Anthony must look inside their hearts and find the courage to take a chance on love.

This book is a part of the LOVE EVERLASTING series, which is one large series following multiple families and friends. Each book can be read as a standalone (unless otherwise noted), or they can be read in order of publication as one long series. Each book is interconnected, with many of the same characters showing up in multiple books.

Read an excerpt from TAKING A CHANCE ON LOVE:

It wasn’t until Saturday, an entire week after Thea and Anthony had arrived, that the rain finally stopped. By that point, the entire cabin was surrounded by mud and puddles that resembled small lakes. Despite the mud, when the sun peeked out from behind the clouds, Thea put on her hiking boots and jacket and headed outside.

She and Anthony had avoided each other since their confrontation in her bedroom. They’d barely spoken more than ten words to each other altogether. That was fine with Thea.

She just hoped that now that the rain had stopped, she could get out of here. Her resolve to stay had disintegrated in the face of actually having to be around Anthony Bertram. And despite wanting to find some kind of dirt that she could relay to Mittens, she wasn’t exactly going to get results by not speaking to him. Or even getting near him or his things.

Thea sighed happily as she felt the sun on her face. Even though mud sucked at her boots with every step, she didn’t care one bit. She could clear her head, take in some fresh air, and maybe figure out how she was going to stay in this cabin with the worst man in existence for who knew how much longer.

Thea’s progress was slow as she went downhill, even slower than the first time she and Anthony had come down here. At one point, she got her foot stuck in a particularly sticky patch of mud, and she had to yank herself free, almost falling on her butt.

Thea wandered to where the bridge had collapsed. It looked worse than a few days ago. Old lumber was splintered in half from the trees that had fallen onto the bridge. The creek had turned practically into a river with all of the rain. Thea’s stomach twisted at the sight.

She and Anthony weren’t going anywhere anytime soon, that was for sure.

Walking parallel to the creek, she let her thoughts wander. Her heart lifted the further she walked from the cabin. She wished she could just walk all the way home and never see Anthony Bertram again.

The night before, she’d caught him coming out of the bathroom in nothing but a towel. She’d frozen, staring at him, deeply annoyed at how damn handsome he was. As if he knew her what she was thinking, with his towel hugging him low on his hips and camouflaging nothing, he’d grinned. Thea had stood her ground, refusing to scamper back to her room like a scared little rabbit.

His scent had curled toward her, spicy and masculine. His hair had curled against his forehead slightly, something so surprisingly playful when the rest of him was so hard and unmovable that Thea wished she could touch that single curl. His cheeks were freshly shaven, but she could still make out the dark grain of his beard. She had a feeling he always had a five o’clock shadow by the end of the day.

Anthony had brushed past her to get to his room right then, but not before he’d leaned down and whispered, “You’re drooling.”

A moment later, Thea had slammed the bathroom door shut so hard that it had shaken the cabin.

Thea blew out a breath as she walked. So what if Anthony was handsome? She wasn’t dead. She also wasn’t going to get her panties damp over a total asshole, either. His kind of arrogance didn’t turn her on. In fact, it was a huge turn-off. His handsomeness definitely did not get her panties wet in any way, shape, or form. The thought of kissing him? Disgusting. Totally, completely, absolutely…disgusting.

A coffee addict and cat lover, Iris Morland writes sexy and funny contemporary romances. If she’s not reading or writing, she enjoys binging on Netflix shows and cooking something delicious.