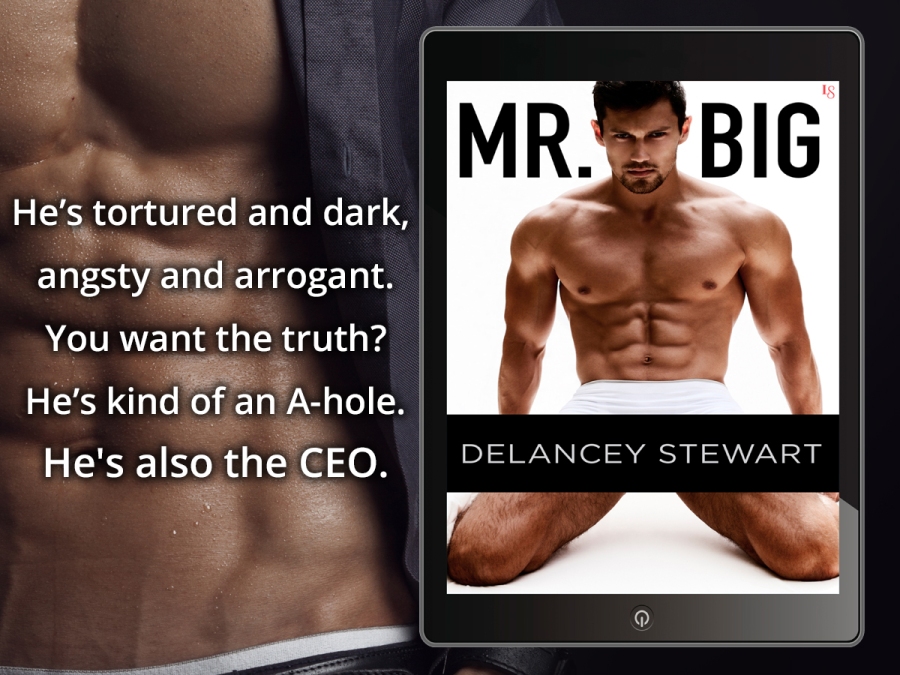 Are you ready to meet MR. BIG? We’re just under two weeks away from the release of MR. BIG by Delancey Stewart – check out the excerpt below and preorder your copy so you can get your hands on Oliver on August 29th!

Once upon a time, I had everything: money, power, a multimillion-dollar company, a loving family. Well, at least I thought I had everything. Then my parents died, and I found out my whole life was based on a lie. That’s pretty much the moment when I went numb. Told the world to f*** off and went on a bender of epic proportion, just to see how far I could fall before I hit rock-bottom.

Now I’m back and all I want in this world is my morning—okay, afternoon—coffee. Then one of my employees has the nerve to call me out for cutting the line at the coffeehouse at the company I own. Sure, I’m a little scruffier than usual, but come on, bitching out the CEO? Not a smart career move. Just who does this smart-mouthed ball-buster think she is? And more important, what do I have to do to get her number?

Holland O’Dell may be uptight, but I wouldn’t mind taking her back to my place and ripping off that business-casual blouse/skirt combo and burying myself in her curves. She pushes my buttons, but at least I’m feeling something. And whatever it is, I won’t stop until I get more.

“Mr. Big is the kind of smart, sexy delight that every woman deserves to read! [Delancey] Stewart will make you believe in true love in this steamy, heart-wrenching tale.”—USA Today bestselling author Sierra Simone

Read an excerpt from MR. BIG

“Where did you come from, Holland?”

“That’s a good question.” I wasn’t trying to dodge, but I didn’t have an answer. Plus, I wasn’t sure he was speaking geographically.

“Were you born and raised in Los Angeles?”

So he was speaking geographically. “Maybe,” I said. “I was raised here. I don’t know where I was born, actually.”

He raised an eyebrow in question.

I took a deep breath. “I was abandoned. They found me in a cardboard box at a hospital in Long Beach when I was a couple weeks old.”

I watched his eyes, waiting for the predictable sorrow, the sympathy most people offered when they heard about my inauspicious beginnings. Hale’s eyes reflected something else, though—they flashed with anger.

“I grew up in foster homes.” I shrugged.

“You were adopted?” He whispered the words, as if he couldn’t believe what he was saying.

I shook my head, a little confused at his reaction. For a moment I wondered if the revelation made him think less of me. It had certainly made me think less of myself for a lot of years. “Nope. Never adopted. Just fostered.” My salad came and I was thankful for the distraction.

Hale watched me intently, a crease between his dark eyes. He seemed about to say something, but then turned his head and stared out at the ocean instead. The sun was flashing on its surface, glittering like cellophane ribbons. I waited for him to ask more questions, but he seemed lost in thought.

We ate in relative silence, me enjoying the sunlight and warmth, and the entire avocado I’d convinced the waitress to bring me. Hale appeared to be focused on something inside his mind, something he didn’t seem apt to share. I decided to push. “What about you?”

His eyes snapped back to mine and then he shook his head, saying nothing.

“Seriously? I share but you don’t?” After spending most of the morning being thoughtful and kind, Mr. Big Dick was back. His face was closed and anger bubbled in his eyes as he turned his focus to his burger. “I see how it is,” I pressed.

He paused, a fry partway to his mouth, and then his hand lowered again, his shoulder slumping. “It’s not that I don’t want to tell you.”

He dropped the fry and leaned back in his chair, a deep sigh escaping his lips. “It’s more that I don’t really know.” He stared down at his plate as he said, “I was adopted, actually. But I’ve only found that out recently.” His voice was cold, almost clinical, like this was a distant fact to be examined, not something integral to who he was.

“And you’re upset?” It was a stupid question. A dark frown had crept over his face and he looked much more like the broody asshole I’d met at Cody Tech than like the almost sweet man who’d been helping me since then. He was clearly upset.

A smile flickered over those incredible lips, but it did nothing to tamp down the sadness in his eyes. “I don’t know. Yes. It’s complicated.”

Without stopping myself this time, I reached for his hand, my own fingers covering the long square tips of his where they rested on the table. He started slightly, as if I’d shocked him, and then relaxed, his thumb reaching around to rub a line across the top of my fingertips. I suppressed the shiver that ran through me. The pain in his eyes had ebbed, and he looked up at me with something that felt a bit like wonder.

Delancey Stewart has lived on both coasts, in big cities and small towns. She’s been a pharmaceutical rep, a personal trainer and a wine seller. Despite lots of other interests, she has always been a writer.

A military spouse and the mother of two small boys, her current job titles include pirate captain, monster hunter, Lego assembler, story reader, and tech writer. She tackles all these efforts from her current home outside Washington DC.