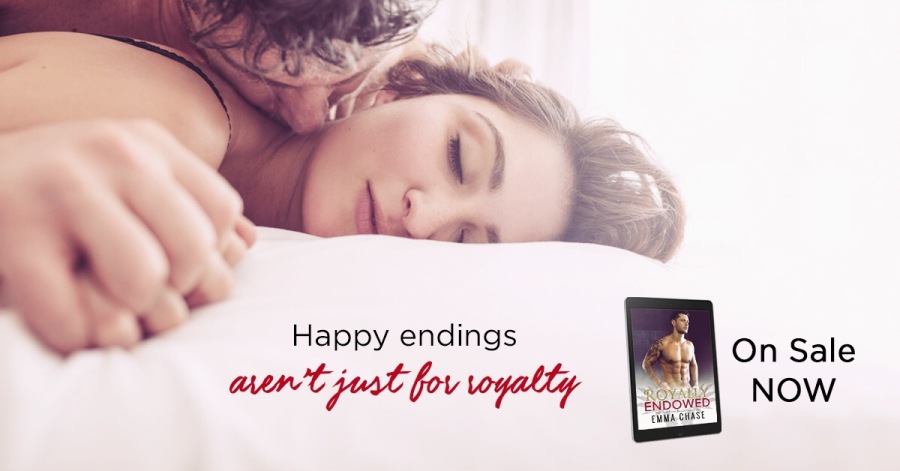 Logan St. James is a smoldering, sexy beast. Sure, he can be a little broody at times—but Ellie Hammond’s willing to overlook that. Because, have you seen him??

And Ellie’s perky enough for both of them.

For years, she’s had a crush on the intense, protective royal security guard—but she doesn’t think he ever saw her, not really.

To Logan, Ellie was just part of the job—a relative of the royal family he’d sworn to protect. Now, at 22 years old and fresh out of college, she’s determined to put aside her X-rated dreams of pat-downs and pillow talk, and find a real life happily ever after.

The Queen of Wessco encourages Ellie to follow in her sister’s footsteps and settle down with a prince of her own. Or a duke, a marquis…a viscount would also do nicely.

But in the pursuit of a fairy tale ending, Ellie learns that the sweetest crushes can be the hardest to let go.
***
Logan St. James grew up on the wrong side of the tracks, in a family on the wrong side of the law. But these days, he covers his tattoos and scars with a respectable suit. He’s handsome, loyal, brave, skilled with his hands and…other body parts.

Any woman would be proud to bring him home to her family.

But there’s only one woman he wants.

For years he’s watched over her, protected her, held her hair back when she was sick, taught her how to throw a punch, and spot a liar.

He dreams of her. Would lay down his life for her.

Everybody knows the bodyguard rules: Never lose focus, never let them out of your sight, and never, ever fall in love.

Some men think with their cocks.

You know the type. Quick smooth-talkers, shifty eyes always scanning for a nice pair of legs, a set of full tits, or a tight arse they can pant after.

Other blokes think too much with their brains. You know that type too. Annoyingly careful, slow-moving, constantly parsing their words like they already know whatever they’re saying is going to come back and take a bite out of them.

I’m not either of those.

I always go with my gut. When it clenches with a warning, I act—no hesitation. When it tugs and nudges, I pause and reevaluate. When it twists and writhes, I know, guaranteed, I’ve cocked up big-time.

My gut is my best friend, my conscience, my most lethal asset.

And it has never let me down.

It’s my gut that drags me to her door. That roots me in place as I knock. That gives me the words—pleading, unfamiliar remorseful words—I’ll gladly say to make this right.

To get her back.

Because while my gut is brilliant, sometimes I can be a real fucking idiot.

Yesterday was one of those times.

I sense movement on the other side of the solid oak door—not in sounds or shifting shadows beneath it, but more of an awareness. I can feel her in there. Nearby and listening.

Her voice is tight, higher-pitched than usual. Upset.

Ellie is difficult to anger, quick to forgive; she just doesn’t have it in her to hold a grudge. So her next words fall like an axe—cutting my legs right off from under me.

“No, you were right. The princess’s sister and the East Amboy bodyguard don’t make sense—we’ll never last.”

Did I actually say that to her? What the fuck is wrong with me? What I feel for her is the one thing in my life that makes sense. That matters.

But I never told her that.

Instead . . . instead, I said all the wrong things.

I brace my palm against the smooth wood, leaning forward, wanting to be as near to her as possible. “Elle . . .”

If a corpse could speak, it would sound exactly like my Ellie does now. Flat, lifeless.

She doesn’t mean that. They’re my words—the insecurities I put on her—that she’s hurling back in my face.

But God, it fucking hurts to hear. Physically hurts—stabbing deep into the pit of my stomach, crushing my chest, grinding my bones. I meant it when I said I would die for her . . . and right now, it feels like I am.

I grab the doorknob to walk inside, to see her face. To see that she doesn’t mean it.

“Don’t come in!” she screeches like I’ve never heard her before. “I don’t want to see you! Go away, Logan. We’re done—just go!”

I breathe hard—that’s what you do when pain wrecks you, breathe through it. Then I swallow bile, straighten up, turn around and walk down the hall. Away from her. Just like she wants, like she asked. Like she screamed.

My brain tells me to move faster—get the hell out of there, cut my losses and lick my wounds. And my heart—Christ—that poor bastard’s too battered and bloody to say anything at all.

But then, just over halfway down the hall, my steps slow until I stop completely.

Because my gut . . . it strains through the hurt. Rebels. It shouts that this isn’t right. This isn’t her. Something’s off.

And even more than that . . . something is very, very wrong.

I glance up and down the quiet hall—not a guard or a maid in sight. I look back at the door. Closed and silent and still.

Then I turn and march straight back to it. I don’t knock, or wait, or ask for permission. In one move, I turn the knob and step inside.

What I see there stops me cold.

Because whatever I was expecting, it sure as fuck wasn’t this.

Emma Chase is the New York Times and USA Today bestselling author of the hot and hilarious Tangled series and The Legal Briefs series. Emma lives in New Jersey with her husband, two children and two naughty (but really cute) dogs. She has a long-standing love/hate relationship with caffeine.