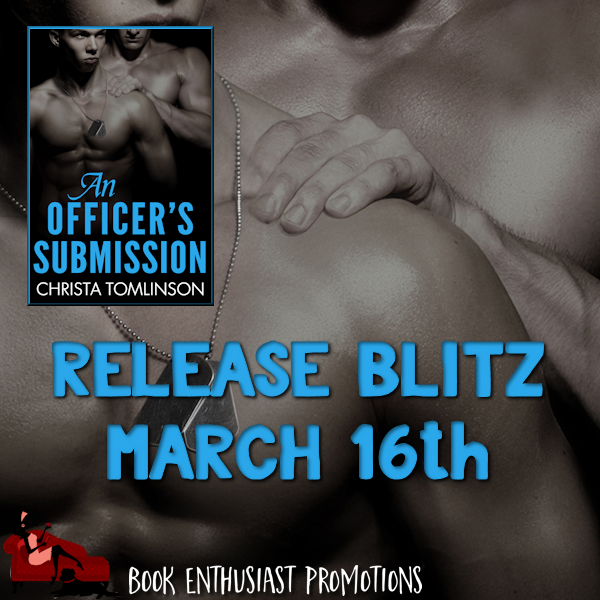 “You don’t ever have to keep anything you feel locked up, Clay. I’m your Dom, and whatever you need from me, I’ll gladly give to you.”
– Sergeant Logan Pierce
Police Officer Clay Foster is finally at peace and happy with his life. He enjoys his career as a member of Houston’s SWAT team, and he loves submitting to his Dom in the bedroom. His life is perfect, until one cruel act destroys Clay’s bubble of happiness. Shattered trust forces Clay to reevaluate his career, his relationship, and himself.
Sergeant Logan Pierce is the leader of Houston’s elite SWAT team. On the force, he’s the best at what he does. In private, the most important thing in his life is taking care of his submissive, Clay. Clay is his whole world, and Logan will do whatever is necessary to keep him safe. Even if that means going up against Clay’s stubbornness in order to help him heal.
Can Logan and Clay work together to rebuild their happiness? Can they find their way back to the shared passion of Dominance and submission? Or will their love and relationship end before it’s truly begun?

Clay lay on the couch, his feet in Logan’s lap. It was a comfortable night. They’d just returned from dinner out with their co-worker, Q, and his wife, Cassie. Q had been a little quiet, but it had been nice to have dinner with the couple. Now they were relaxing before bed. The TV was on, but Clay wasn’t paying any attention to it. Instead, he focused on Logan, who absently rubbed Clay’s foot while they watched the ten o’clock news. He looked good as always, dressed in a lightweight, chocolate-brown sweater that complemented his dark blond hair and hazel eyes. His face was clean-shaven, his jawline hard. Logan looked exactly like what he was—a regimented and in control SWAT team sergeant for the Houston Police Department. When a commercial came on, Clay spoke up. “It’s good to be back home.”
Logan looked down at him with an eyebrow raised. “Home?”
Clay snorted a laugh. As usual, they were at Logan’s house. When he thought about it, he realized he hadn’t been back to his apartment in weeks. In fact, his bags from their recent trip to Colorado were here at Logan’s. He hadn’t bothered to take them back to his place after their return.
“If I’m in your space too much, I can throw all my stuff in the car and head back to my apartment,” he said as he pretended to pull away.
Logan tightened his grip on his foot. “You’re not going anywhere.”
Clay bit his lip to hold back a grin. “I didn’t think you wanted me to. But what I meant is, I feel good about life. That trip was awesome. I got to play in the snow, just like I wanted.”
“And I got to warm you up when you were done.”
“You did a very good job. You might have gotten me a little overheated a few times,” he teased. He wiggled his toes as Logan squeezed his foot again. “You and I are in a great place. And I think things are going to be better at work now too. We redid Hayden’s ridiculous course and passed with flying colors this time.”
“And you didn’t have any fights with Ryan afterward,” Logan said with a smile.
Clay rolled his eyes. “Ryan is cool people now. He wasn’t cool then.”
Logan gave him an admonishing look. “Still, you shouldn’t have started that fight. You knew better.”
“I know. But he pissed me off. And maybe it was good that we had that fight to get all of the animosity out of our systems.”
“Hmm. Maybe.”
“Anyway. I’m hoping the fact that we passed the redo means Hayden will get off our backs and quit fucking with our schedule.”