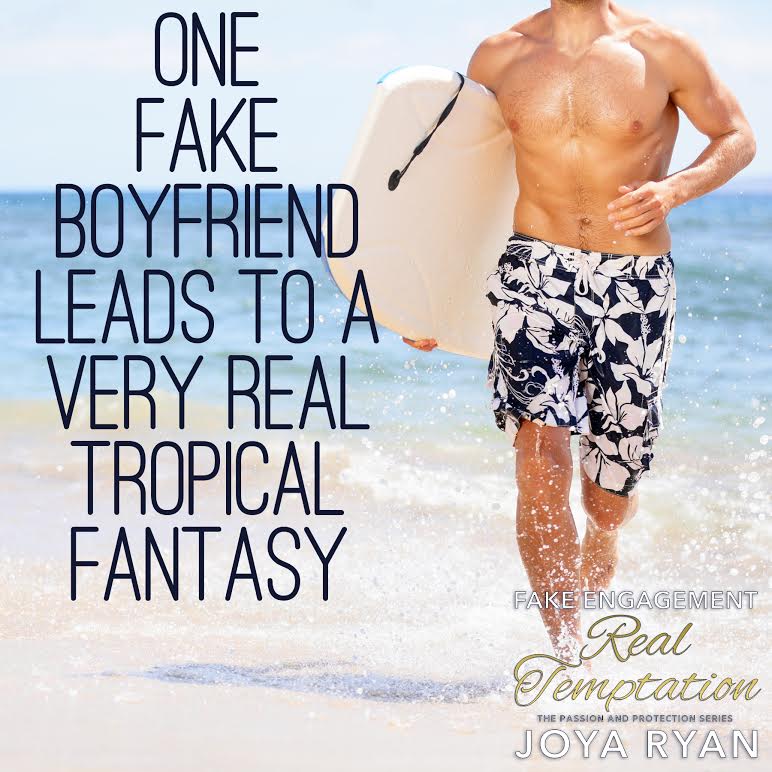 Oh. My. God. Carrie Morgan can’t escape her cheating ex fiancé. She goes on her Hawaiian honeymoon fantasy vacation to prove she’s over him—but he’s there with his mistress in tow. Good thing Carrie’s annoyingly over-protective friend Blake came with her. How’s she going to prove to her ex she’s over him? Easy. One… Two… Three… She grabs Blake and kisses him.

Blake Harris isn’t about to let anyone take advantage of his heartbroken friend Carrie. And that includes himself, even if she’s sexy as sin in that bikini. Then she kisses him—and he’s on fire. Damage done, but he can back off. Except he sees that broken look in Carrie’s eyes. No. Hell no. New plan. He intends to show her ex just what he’s thrown away.

The kisses? For show. The heat? Part of the performance. The private practice sessions? Uh-oh. Those are starting to feel a bit too real…

He hustled her direction, and it wasn’t until he got closer that he saw the massive pink suitcase she was fighting with was broken, and the fuzz in question was coming from her—as in the bottom piece of her dress, and she was next in line to drop off her bag.

“Jesus Christ,” he said, walking up to her. She looked up from the fight with her bag, blew a lock of hair out of her face, and scowled.

“What the hell are you doing here?” she asked. There was that sass. He’d take attitude over her tears any day.

“I could ask you the same thing,” he said.

She pointed at her suitcase. “Well, you’re the genius with the idea to go on my honeymoon alone, and since my arms get tired when I flap them longer than ten minutes, I have to take an airplane to Hawaii.”

He raised a brow, his blood igniting in that way that only Carrie could make it. That snarky tone made him want to spar with her. But he knew her well enough to know she was still hiding pain beneath the brazen attitude.

“I’m glad to see you found your sassy pants,” he said. “Maybe they’ll keep you warm under that dress.”

She rolled her eyes and Blake continued.

“Spotter?” she cut in, using his term from earlier.

“Well I’m a grown up and I’m not taking my brother. That’s weird and, oh right, I’m. A. Grown up!” she said slowly, like he was an idiot.

“Lane can’t make it,” he said frankly and watched her eyes go wide, the truth hitting her.

“Lane sent you,” she said with venom in her voice. “How did he even know I was here?”

“He didn’t, I did,” Blake corrected quickly. “After our talk and realizing you wouldn’t wait, I tracked you down here.”

“Oh right, the infamous tracker,” she said, and Blake wished she sounded more impressed. Not sure why that mattered. Maybe he could contemplate that if he wasn’t too busy staring down plump, tan skin, currently heaving out of the top of her dress.

My god she looked incredible.

But Carrie was clearly in a mood, and he couldn’t blame her. Last thing he should be doing is checking her out. Which he wasn’t. Because not only was she just left at the altar, but she was his best friends little sister. No way in hell was he thinking of her in any other way other than a lady to be protected.

Truth be told, he thought she’d be a crying mess of sad clown makeup but instead, she was huffing from the suitcase, making the tight, low cut of her dress dip even more, giving him yet another prime view of the most perfect cleavage he’d ever seen.

Kevin was an idiot to not show up for a woman like her.

“Well you found me,” she said exasperated. “So you can report back that I’m fine. Bye.”

National and international bestselling author Joya Ryan is the author of more than a dozen adult and new-adult romance novels. Passionate about both cooking and dancing (despite not being too skilled at the latter), she loves traveling and seeking out new adventures. Visit her online at http://www.joyaryan.com.