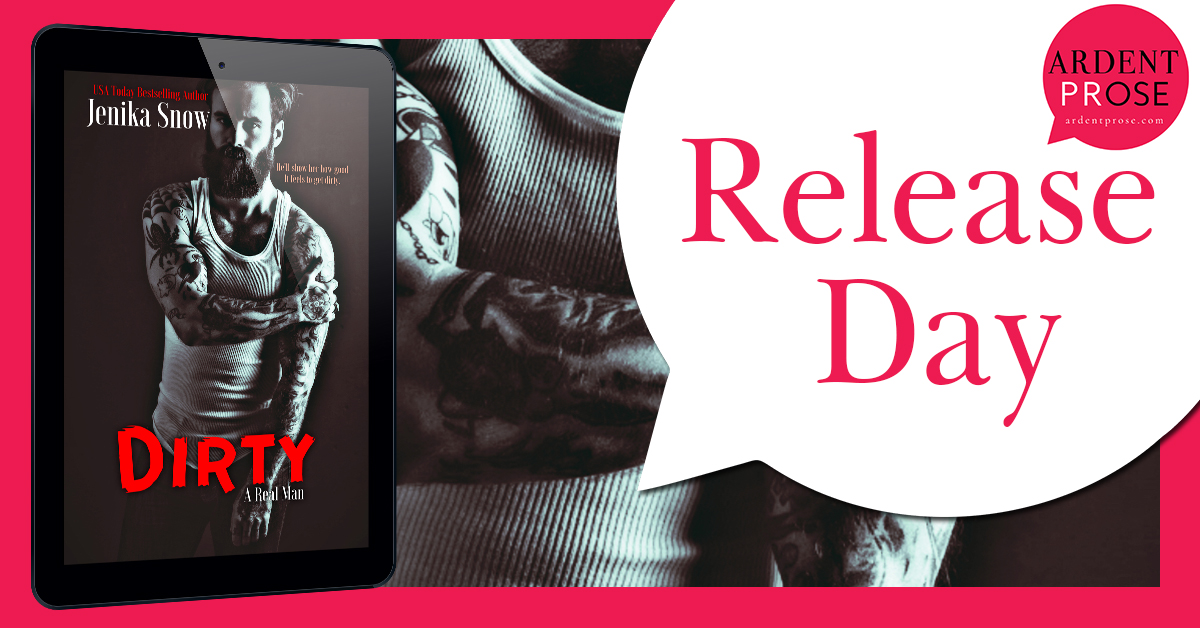 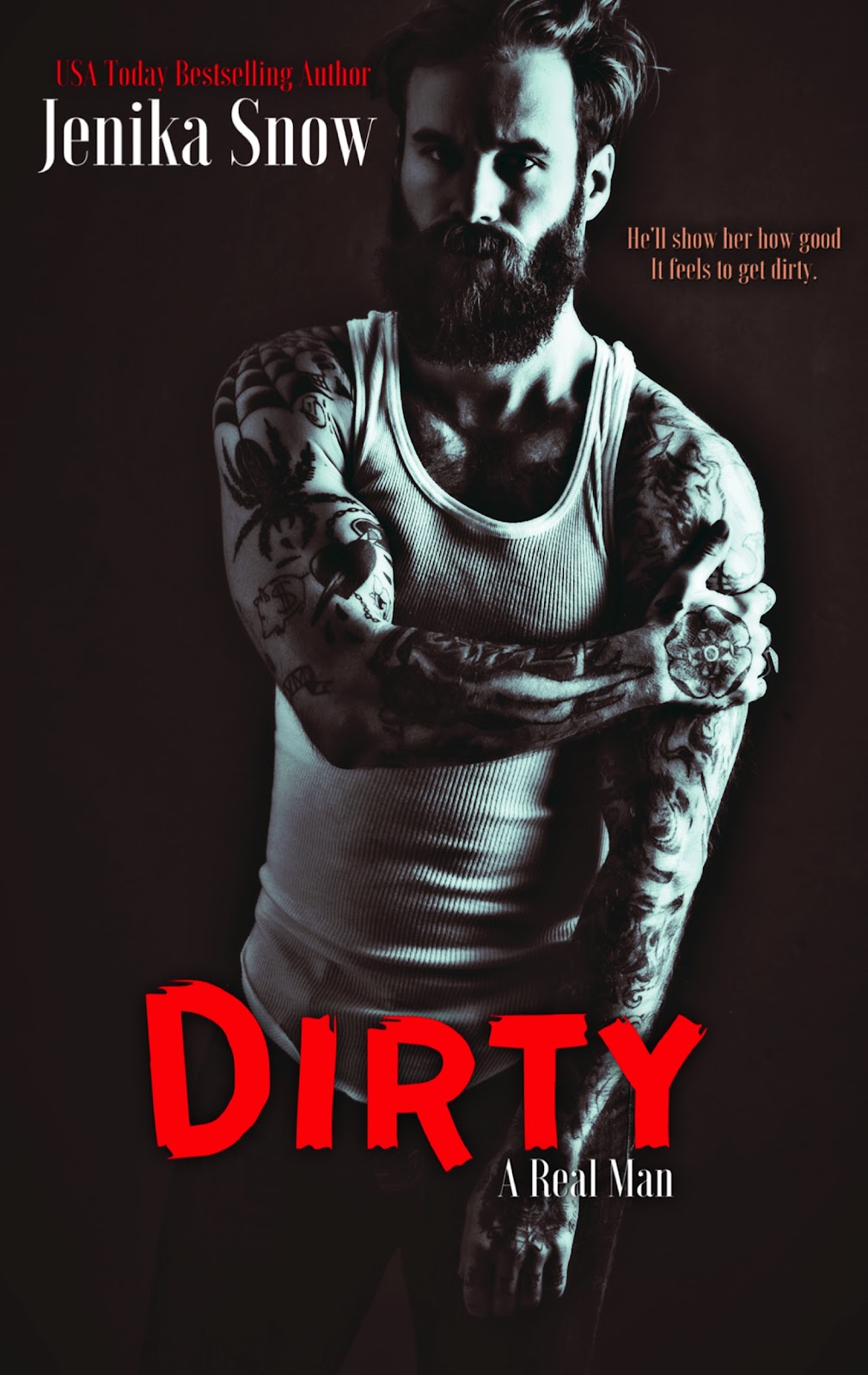 I’m going to show her how good it can be to get dirty…JosephineMoving to a small town for a new job was the only thing I should be focused on. But the first time I see Gabe, all of that goes out the window. He’s the owner of a garage in the town I now call home, and picturing the filthy things he’d do to me with those grease-stained hands fills my head.The way he looks at me makes me feel like a woman, like he’s undressing me with his eyes … like he could teach me a thing or two about what a real man does with a woman in his bed.I don’t care if being with him is fast or sudden. I want him to devour me.GabeThe first time I lay eyes on Josephine, I know she’ll be mine.I won’t stop until she is.I want to get my dirty hands all over her. I want to make that creamy pale skin of hers dark from grease, and red from holding onto her.And I’ll do all of that, because there’s no way I’m backing off, not until I know I have her.Warning: You like filthy and insta-love? Well, this story is full of it. If you’re into a hero who knows how to handle his woman, and a heroine who’s all about tall, dark, and dirty, you better hang on because this story will most definitely give you whiplash.

I left the bathroom, my focus on the ground, my thoughts on the crazy things I was feeling. I slammed right into someone and assumed it was Gabe from the way he cupped my arms and the low, masculine grunt that left him. But when I looked up, it was some random guy. He was young, maybe fresh out of high school. He smelled like middle school though, like that eighth grade Cool Water aroma that wasn’t bad but also brought back those awkward adolescent memories.“Sorry,” he said, a grin already in place. “You new here? Just passing through?”I didn’t want to be rude, but I also didn’t want to small talk with some random guy about whether or not I was new in town. It might have been some cheesy pickup line, or he could have been trying to genuinely be nice. Either way, I wasn’t in the right headspace for it.He still had his hands on my arms, but before I could move away or even respond to his question, I saw Gabe step up behind him. Gabe was a whole head taller than this guy.“You got somewhere else to be,” Gabe said, not phrasing it like a question.The guy turned around, and the expression on his face told me he was annoyed. “Excuse me—” But that last word kind of hung in the air between them when he saw Gabe.“I’m sure you got something else to do than speaking with Josephine,” Gabe said. He crossed his big arms, this easy but also serious expression hanging over him.“Hey, Gabe,” the guy said.Okay, they clearly knew each other.“I didn’t know she was yours,” the guy said, holding up his hands. There was no weirdness between them. But there was this dominance coming from Gabe.The guy ended up leaving, and I stood there wondering what in the hell had just happened.“Ready?” Gabe said as if that little exchange wasn’t weird as hell. He went to leave, but I felt myself rooted to the spot.
“What was that?”He stopped and looked over his shoulder. “What?” He turned fully around then.“That…that…” I was at a loss for words right now. He’d been marking his territory. That’s what it had certainly seemed like. But that couldn’t be. I hardly knew him. And would a man be possessive of a woman he just met? He hadn’t even hit on me, and aside from a few looks I’d seen him throw my way, he’d seemed indifferent toward me.He lifted a dark eyebrow. “That was what?”I didn’t know, so instead of saying anything, I just opened and closed my mouth.“Come on,” he said, his voice deep.I found myself following him out of the diner, across the parking lot, and when I had my hand on the door handle, I finally found my voice.“That was fucking ridiculous.” I surprised even myself with the words that spilled out of my mouth. Gabe had my door already opened, but he was on the driver’s side, waiting. When I spoke, he shut his door and walked around the truck to where I stood.“You think so?”I nodded, crossing my arms over my chest. “Yeah, I do. You don’t even know me.” he had the passenger side door closed a second later, and placed his hands on either side of me. He moved close, his big body pressed almost to mine. I had my hands hanging at my sides, my throat tight, my breath stalling. “What are you doing?” I asked, my voice barely a whisper.“What does it look like I’m doing?” He glanced down at my mouth.I swallowed the lump in my throat. “It looks like you’re invading my personal space.” And he was, really invading it, but the thing was I wanted more of it. I felt hot, a flush stealing over me, making my heart beat faster and my palms sweaty. He smelled so good too. Gabe smelled like a real man. All man.“You don’t want me this close?” he asked, his voice low, the hint of a question hanging between us. “Or maybe you do like it.” He pressed his body flush with mine, hard to soft. He was all lines, masculine dips, sinew, and precise muscle.
“I don’t even know you,” I managed to say again, but it was clear, even to me, that not knowing him intimately didn’t mean a thing. I didn’t care that there were probably people staring at us, that we looked like a couple about to get it on.God, I’d like to get it on.“What do you want to know about me?” he asked, his focus on my eyes now. “I’ll tell you anything you want.”I believed he would.“For starters, I don’t know your last name.”“Dressin,” he said without missing a beat.“Or your age—”“Thirty-five.” He fired that answer back at me, his gaze on my lips again. I couldn’t help but lick them. A guttural groan spilled from him, and I felt myself get wetter, felt my panties become soaked for this man.When he slowly lifted his eyes to mine, he was heavy-lidded, his arousal clear. It was like our lust for one another bounced between us. I absorbed his, he absorbed mine, and together it was so intense we were saturated with it.“What are you doing?” I asked again, but this time in a barely there whisper. He didn’t speak for a second, but the look he gave me screamed one word.Mine. 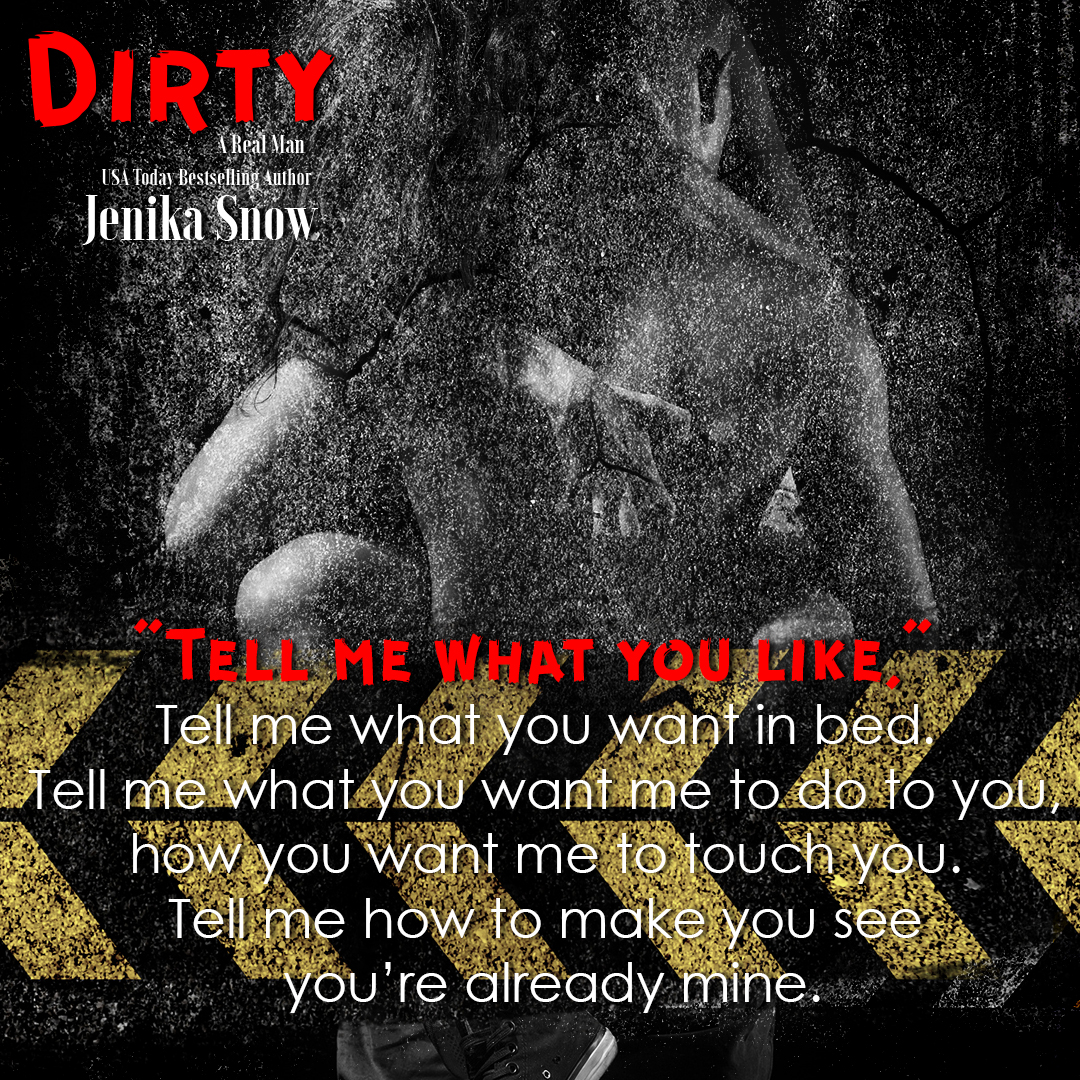 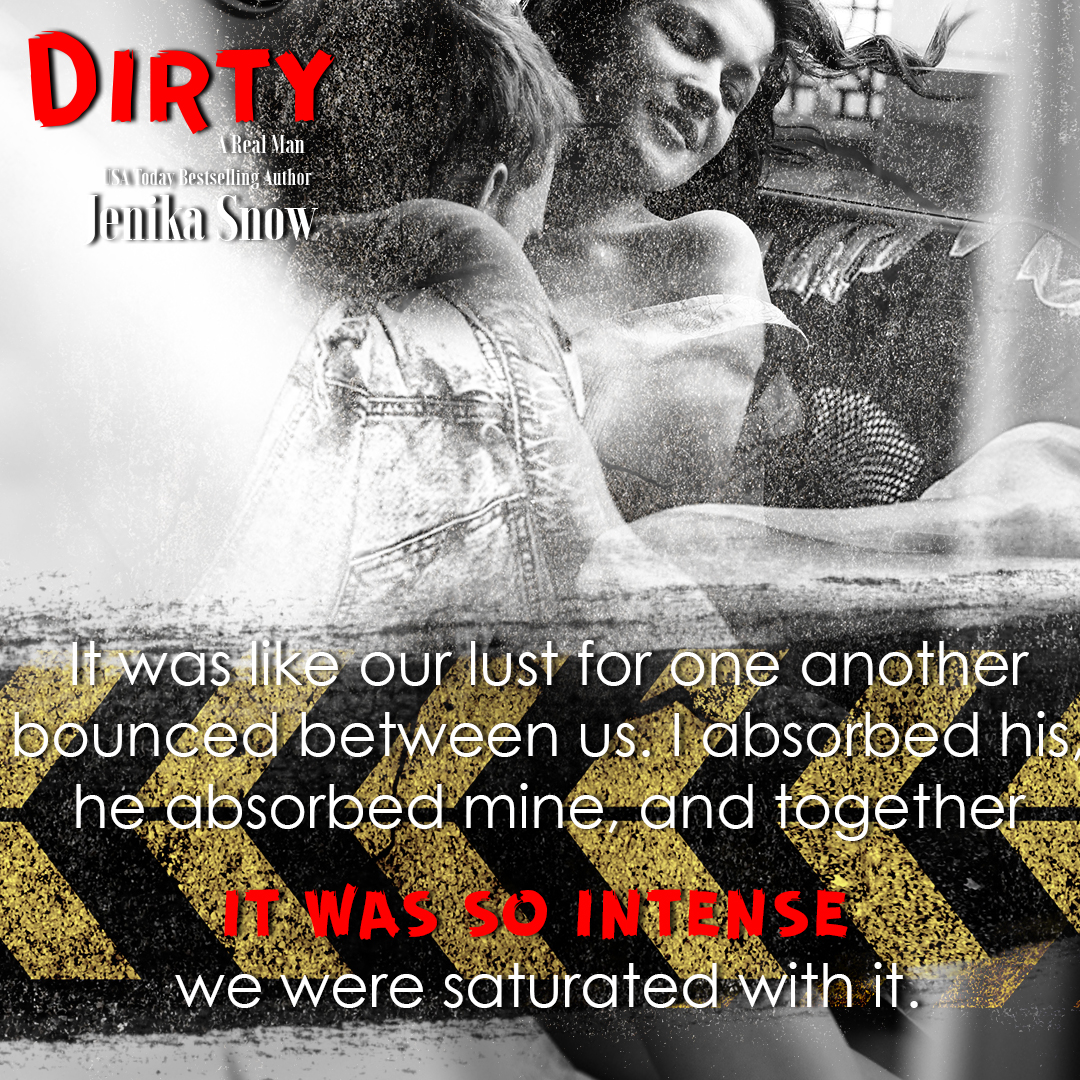 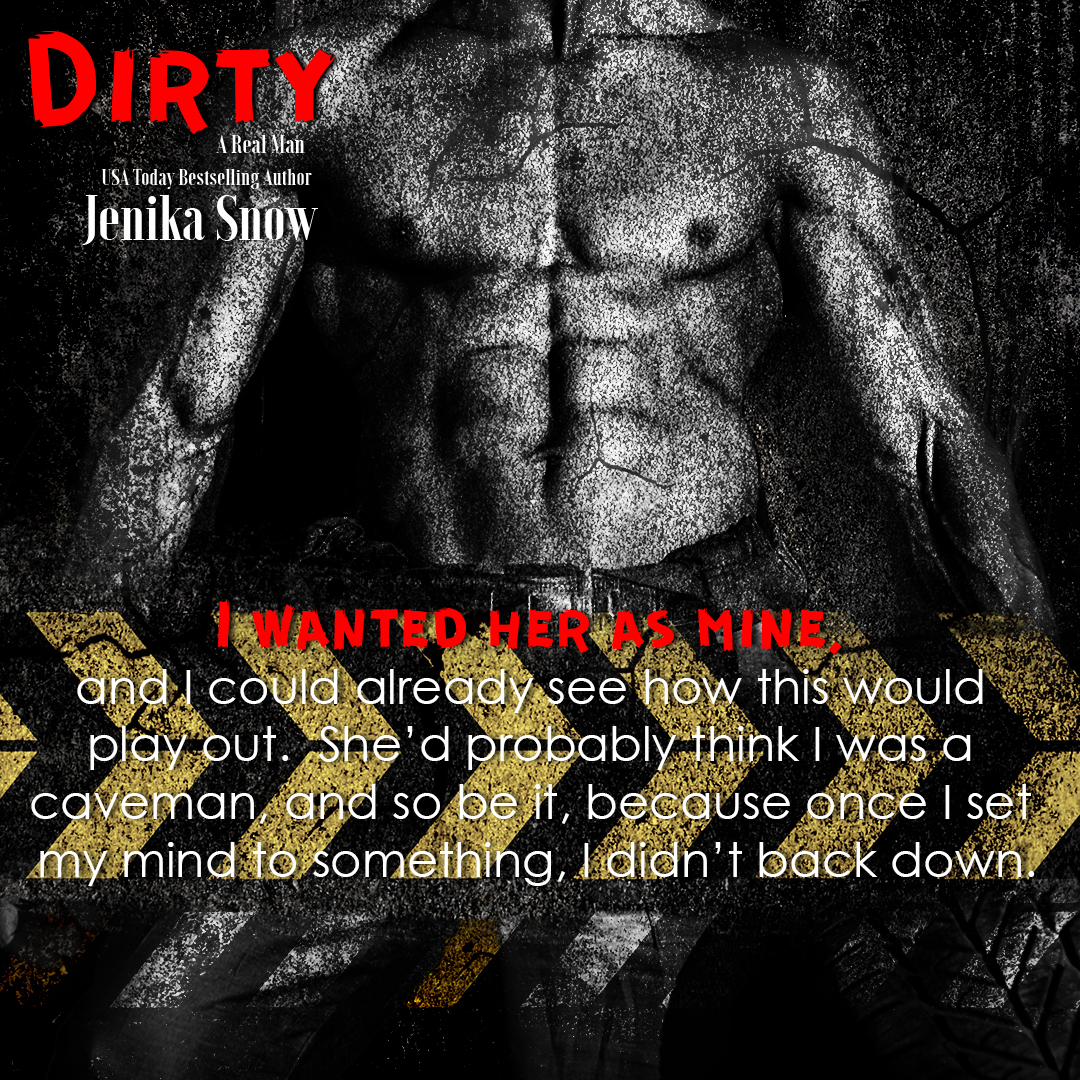 Jenika Snow is a USA Today Bestselling Author that lives in the northwest with her husband and their two daughters. Before she started writing full-time she worked as a nurse.
Author Links
Twitter  Facebook  Web  Goodreads  Amazon